Dede Evavold was released from Dakota County Jail so that she could remove the remaining online material she posted about a family law custody case. She had previously violated a judge’s court order by posting that information. Evavold’s husband Darin Evavold had previously brought Dede’s laptop to court so that some of the information could be removed.

Editor’s Note: In this era of free speech and the First Amendment, this Minnesota Court and the custodial father’s Minnesota Family Law Attorney Attorney Lisa Elliot are leading the county in taking steps to protect the privacy and rights of these children. We applaud them. And thank you to investigative reporter Michael Broadkorb for his Pulitizer-deserving reporting of this story.

In following these protective parent cases over the past 2 decades, we have never seen three supporters of this cause do more to ruin their lives than Sandra Grazzini, Dede Evavold and Michelle MacDonald. They also have caused more undeserved harm to the children, the father and the families as well as an unprecedented amount of court resources. In this new era of coparenting area, it could have all be avoided if Sandra Rucki would have either shared custody or given away her custody rights.

What about some Privacy for the Sandra Grazzini’s Children in 2018? 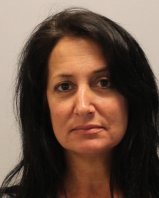 Sandra Grazzini was found guilty of six counts of felony deprivation of parental rights on September 21, 2016. On November 10, 2016 Dede Evavold was also found guilty in September 2016 of six felony counts of deprivation of parental rights. On May 2, 2017 Doug Dahlen and Gina Dahlen were sentenced to one year in jai for their role in the Parental Kidnapping.

In February 2017, actress Kelly Rutherford was able to declare bankruptcy and potentially walk away from $1.1 million she owed her family law firm and substantially reduce the $1.57 million in child support owed her former custodial spouse. That being said, Kelly Rutherford has appeared to move along with her life as a non-custodial parent. You don’t see any social media posts about her custody dispute and/or former spouse.

As of July 2017, protective parent mother Maya Tsimhoni continues to litigate in court with her former spouse. However, despite 8 years of litigation, $400,000 in joint legal fees, 1,0001 docket entries and 21 lawyers involved in her case — she or her representatives no longer post on social media about her case or her children.

Unfortunately, Sandra Grazzini and her friend Dede Evavold have been unable to move along with their lives and respect the privacy of Sandra’s children and former spouse. Evavold is alleged to have been posting about the case and Sandra’s former spouse on the Internet. A court hearing for this alleged probation violation by Dede Evavold will be held on January 9, 2018.

Despite their belief as “child protectionists”, their support for the “Protective Parent Movement” appears to have given them a self-proclaimed license to commit acts of civil disobedience. And this act would include violating any court order to not violate the privacy of the victims of their felony crimes.

So as we start off 2018, we want to know what makes Dede Evavold and Sandra Grazzini and their case so different than that of Rutherford and Tsimhoni? Why would Grazzini’s supporters still disparage Sandra’s custodial former spouse? We really hope the judges involved will take action in 2018 to give the Grazzini children some privacy in 2018. We really hope that those third party supporters of Grazzzi will wake up in 2018 and realize that disparaging the former spouse on the Internet is not respecting the privacy of the children in this case.

A Case Study in How to Prosecute Family Abduction Cases

Convicted of Deprivation of Child Custody

Most District Attorneys in the United States have never prosecuted a Parental Kidnapping or Family Abduction Case. In 2016-17, Dakota County Minnesota Prosecutor Kathryn Keena prosecuted Sandra Grazzini-Rucki, Dede Evavold, Gina Dahlen and Doug Dahlen for Felony Deprivation of Child Custody. All four were found guilty and received jail sentences. Judge Karen Asphaug also sentenced Sandra Rucki and the Dahlens to jail time in day increments over a range of years. If there is any punishment that would be more appropriate for this type of crime is this form of sentencing. It allows the local Probation Department to more closely monitor the defendant after they are released from jail and results in protecting the victims of this crime.

In Parental Kidnapping cases, after the kidnapper is released from jail, in a number of cases the convicted protective parent attempted to snatch-back the child or commit the crime again. Since the convicted parental kidnapper normally goes back to Family Court to re-start the custody litigation, it provides the best possible scenario for the protective parent de-escalating the conflict. Although we have not yet seen that with Sandra Grazzini — we have seen it with other convicted protective moms. They eventually abide by the Custody Orders and make the most of their custody time with their children.

This type of sentencing should also help to motivate a recovered adult-child kidnapped to reunify with the left-behind parent. Although no court could order a reunification — all of us in the Family Abduction Community believe that Judges, Probation Officers, Parole Officers, Child Psychiatrists, Child Psychologists should encourage the convicted protective parent to support the reunification in these cases. We’ve seen in some cases the adult-child that was kidnapped is concealed even after the protective parent was arrested and convicted. The left-behind parent is never reunified with their kidnapped child.

Eventually, we would like to see harsher Family Abduction Laws in both America and other Countries. Until that time, any prosecutor that is assigned a Family Abduction Case should review this case. 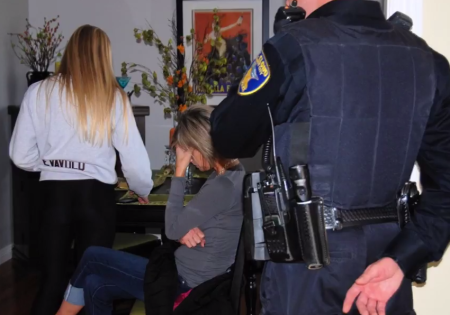 Dede Evavold has until February 11, 2017 to pay her court fines and restitution. She also appears to be blogging about her victims. 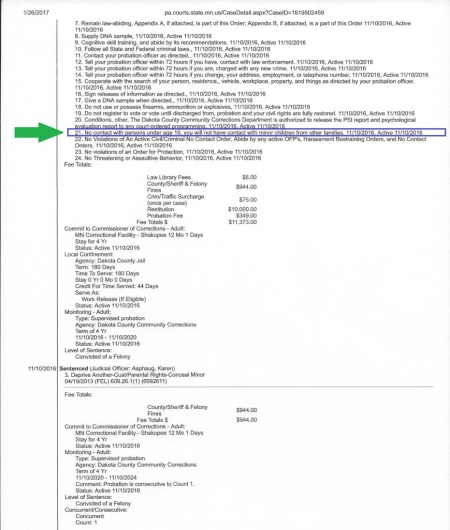 At this point in these cases, the discussion point is: “Is the purpose of our criminal justice system to punish or rehabilitate?” In our humble opinion, and that of Dede’s sister it’s time for rehabilitation. It’s time for the Protective Parent / Family Court Critic Movement to take some ownership here and help Dede get the treatment that she needs.

Dede Evavold, one of the first parental kidnapping conspirators / protective parent movement supporters convicted in America has been released from jail. She will be on probation for 8 years and is prohibited from being around minor children and will serve part of her jail sentence over the next 8 years.

Editor’s Note: The very wise Judge is this criminal case really understood the protective parent movement and activists like Dede Evavold. Her sentencing rightfully addresses the privacy and rights of the victim children in these case that are now with the custodial father. The Family Abduction Community applauds this judge!

Gina Dahlen and Scott Dahlen, the owners of White Horse Ranch in Hermann, Minnesota plead guilty to one count of depravation of parental rights for their role in the Teenager Family Abduction of the Rucki girls

It is unclear of the Dahlens were charged with a Felony. They testified against both Sandra Rucki and Dede Evavold.

Gina and Doug Dahlen will be sentenced on April 3, 2017 at the Dakota County Judicial Center in Hastings, Minnesota.

The horse did not plead guilty.

Her sister calls Dede a “crazy activist narcissists“. The sister says she has a undiagnosed mental condition. She says Dede was fine until she met Attorney Michelle MacDonald. 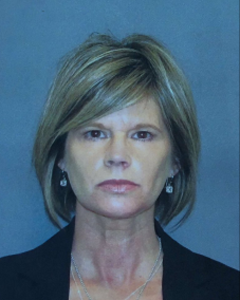 In the end, on November 10, 2016 Minnesota Protective Parent Network leader Dede Evavold was sentenced to 180 days in jail, probation for 8 years and most importantly she can’t be around minor children.

This judge in Dakota County appears to be one of the only judges in America or the World to understand the tenets of the Protective Parent / Family Court Critic leaders like Dede Evavold. In this case, the punishment while only 3 months in jail is accompanied by 8 years probation. And like a child molester or abuser, she can’t be around minor children.

It’s Time for Dede Evavold to Move On

Dede Evavold did the crime now she needs to do the time. In the best interest of the Rucki children that rightfully deserve their privacy, it is time for Dede to move along. With good behavior, she can reduce the amount of time she spends in jail.

The Protective Parent / Family Court Critic Movement has existed for many years in evangelizing and supporting the crime of parental kidnapping, but the verdict in the Rucki case has sent a loud and clear message — our Nation’s Criminal Justice System will no longer tolerate this crime. It took over almost 25 years since the Faye Yager trial, but the prosecution of Dede Evavold as an accomplice should do more to deter others from engaging in this crime than any other case.

Unfortunately with any criminal case in the media, it often attracts some nefarious characters with grievances again others. Some of these characters may be an active threat not only to the victims of this crime but to possibly themselves and the community. That being said, it is time for Dede to move along and let the victims of this crime have some peace. This family and these children need to move forward with the lives and it’s time for Dede and her supporters to respect this.

In Family Abduction Cases, it is a well known statistic that in 75% of the cases, a family member or friend knows the location of the abductor and kidnapped child. In the Sandra Rucki Case, law enforcement raided the home of third party accomplice Dede Evavold with a search warrant and uncovered critical evidence that led to recover the the kidnapped children.

As most victims of parental kidnapping cases would say, the most frustrating part is that family members and friends always always know the location. Yet law enforcement is reticent to get a search warrant and enter the property of the family members and third parties. And in this new digital era, there is usually a digital footprint on cell phone and computers. In past cases, these third parties felt that they were protected from both search and seizure warrants and criminal prosecution.

That all changed with the prosecution in Dakota County Minnesota of Dede Evavold with 6 Felony Counts of Deprivation of Child Custody. That being said, it is hopeful that other local law enforcement and District Attorneys will study this case to assist them in bringing home the thousands of currently missing children.

As we have learned from almost all of these protective parent cases, it’s nearly impossible for any protective parent to go underground or hide with a kidnapped child for a very long period of time. They will always need financial assistance and support from their families and friends.

Again, it’s time to bring home the other children and to prosecute these accomplices. It may also be time for some of these accomplices to step forward before they too end up in jail like Sandra Grazzini and Dede Evavold.